Seeking to put God’s love into action, Habitat for Humanity brings people together to build homes, communities and hope.

Our Commitment to Diversity, Equity, and Inclusion

Habitat LA envisions a world where every person has a decent place to live. Our mission was born from a tradition of radical inclusivity, where people of all races, faiths, and backgrounds come together for a common cause.

We create a culture of inclusion that does not eliminate personal differences but celebrates them, allowing for a shared place of love that encourages progress toward a more just society.

We empower communities to build equitable and inclusive neighborhoods through housing opportunities and community development.

We promote mutual respect, collaboration, authenticity, and a foundation of understanding among our staff, volunteers, and donors.

The overwhelming need for housing in our communities has provided Habitat for Humanity of Greater Los Angeles (Habitat LA) with a unique opportunity to change lives in our neighborhoods.

Los Angeles ranks as one of the least affordable housing areas in the U.S., and yet Habitat for Humanity is one of the few - if not only - affordable homeownership programs that serves families and individuals earning 50-120% of the median family income.

Cost burden and overcrowding are the most serious problems experienced by very-low-income Southern California residents.

Working with volunteers, families, individuals, corporations, congregations, and donors, we are able to address this important housing issue throughout greater Los Angeles. We are dedicated to making homeownership possible for low-income, hardworking families and individuals.

We offer a hand up, not a hand out

Since 1990, we have built, rehabilitated, or repaired over 1,000 houses in neighborhoods all across greater Los Angeles. Shelter is a basic human need, and Habitat for Humanity strives to achieve its goal of eliminating substandard housing by making decent, sustainable, and affordable housing a reality for all.

Learn more about Habitat LA's past, our most famous supporters, how we work with families and more.
The organizational meeting that led to the formation of Habitat for Humanity took place in 1976 inside a converted chicken barn in South Georgia on Koinonia farm. With our exponential growth in the intervening years and the tremendous support of people like you, Habitat homeowners around the world have achieved the strength, stability and independence they need to build better lives for themselves. Today, our work together has helped millions of families. Habitat for Humanity of Greater Los Angeles (Habitat LA) was an all-volunteer run organization until 1998, when our first employee was hired. The first offices were in the basement of a small church in Long Beach. We have now grown to have three locations across Los Angeles county and over 130 employees working hard each day to build better futures.

Habitat for Humanity International’s Habitat Humanitarians include President Jimmy Carter and Rosalynn Carter, Garth Brooks and Trisha Yearwood, and Drew and Jonathan Scott. Habitat Humanitarians are a group of volunteers who also serve as tireless champions, advocates and spokespeople to raise awareness of the need for decent, affordable shelter in the U.S. and around the world.

The volunteers who work with Habitat every year aren’t just prominent leaders and celebrities, they’re your next-door neighbor, your work colleague or a person like you just looking to make a difference. We always have room!

Families who partner with Habitat help build their own homes alongside volunteers and pay an affordable mortgage. Homeowners invest their time, money and sweat in building their house. They work beside volunteers who work hard to help them construct a home. The money from their mortgage goes toward helping another family realize their dream of homeownership.

In addition to building new houses, we also partner with families in need of a new roof, a wheelchair ramp, or other vital repairs. We work to revitalize communities and help those affected by local disasters. Globally, our tithe supports Habitat’s work in other countries including building shelter, disaster response, microfinancing, and more.

Beyond building and repairs, Habitat for Humanity has an extensive advocacy effort in the U.S. and abroad. This effort works to improve less visible aspects of housing, like laws, regulations, systems, and policies that affect affordable homeownership. Our Cost of Home campaign is a leading effort to eliminate barriers to adequate, affordable housing.

The record for building a new Habitat house in the least amount of time was established in Alabama’s Shelby County — 3 hours, 26 minutes and 34 seconds, breaking the previous record of 3 hours, 44 minutes and 59 seconds. Whenever possible, Habitat builds and improves homes using the latest technologies. From Energy Star-rated appliances to solar panels, innovations allow homeowners to save money on energy costs.

Every year since 2007, lumber milled from the Rockefeller Center Christmas Tree has been used to help a family build their Habitat house. Tishman Speyer, the owner and operator of Rockefeller Center, generously donates that lumber to Habitat, and company staff members build alongside a family.
Habitat LA’s social media presence reaches a combined audience of almost 70,000 followers. Are you one?
At Habitat LA, we believe that every child needs a place to call home. A place where they can grow up healthy, be safe, and learn. Your tax-deductible donation – no matter the size – can help a family build a more secure future. Give today! 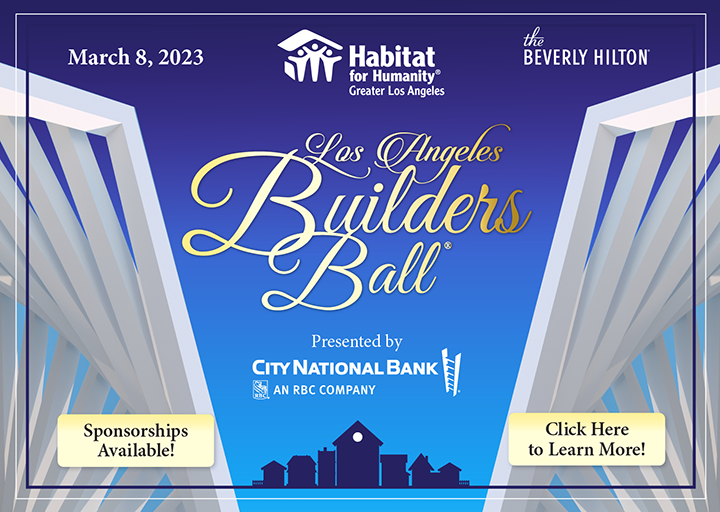