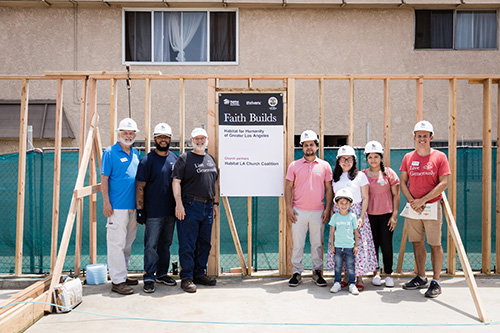 On Saturday, July 24, 2021, we were honored to kick off the build of two new homes—the 23rd and 24th in partnership with the Thrivent Faith Builds program. The homes are located on our 94th St. development site in South Los Angeles.

Thrivent has been one of Habitat LA’s most significant donors. Since 2005, they have contributed over $276 million and 6.3 million volunteer hours to Habitat’s global mission, while serving over 25,000 individuals around the world! In addition, the Thrivent Faith Builds’ Generosity Challenge encourages churches to raise additional support and to utilize their volunteers to build the homes. 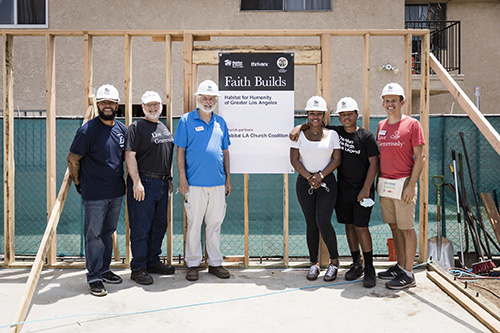 Habitat LA was thrilled to welcome the volunteers from Saddleback Church who helped to build and raise the first walls for these homes. In addition, Saddleback also organized a food distribution drive with Sunnyside Baptist Church, located just down the street from the build site. The drive provided hundreds of local neighbors with groceries.

Habitat LA is thankful to the more than 12 churches who will come together to help build the two homes in the months ahead, with construction slated for completion by the end of the year. Volunteers from Thrivent, along with faith and community partners and the future Habitat homeowners, will work together to build the two new homes.

View video highlights of the event.

Check out our Flickr album with more photos from the event.

Interested in getting your church involved with the build? Please contact Chris Untiet, Habitat LA’s Director of Faith Relations, at chrisu@habitatla.org.