Annual Gala will Honor AECOM, Thrivent Financial, and The Los Angeles Rams, and Include a Special Musical Performance by The Pointer Sisters 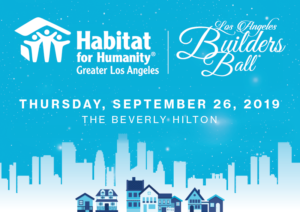 Los Angeles, CA – July 24, 2019: Habitat for Humanity of Greater Los Angeles (Habitat LA) is thrilled to announce City National Bank as the presenting sponsor of the 2019 Los Angeles Builders Ball® on September 26th at The Beverly Hilton. The annual, star-studded event celebrates outstanding individuals and companies that share Habitat LA’s commitment to revitalizing and transforming the landscape of Los Angeles. This year, Habitat LA will honor AECOM, Thrivent Financial, and The Los Angeles Rams. The evening will feature a reception, followed by dinner, and a special musical performance by The Pointer Sisters.

“City National Bank has had a long-standing partnership with Habitat for Humanity and we are grateful for their continued support for affordable housing in our community,” said Erin Rank, President and CEO, Habitat LA. “As a fellow Los Angeles based company, City National Bank shares our commitment to improving our local community and empowering its residents and we are thrilled to have them as the presenting sponsor of this year’s Los Angeles Builders Ball.”

“City National Bank couldn’t be more honored to be a part of an organization that helps families get into homes of their own,“ said Linda Duncombe, Executive Vice President and Head of the Marketing and Product Strategies Group for City National Bank. “We both share a deep passion and commitment to building strong communities and we understand the far-reaching effects of investing in people through Habitat for Humanity. There are few things more critical to success and overall well-being than having access to affordable housing.”

About Habitat for Humanity of Greater Los Angeles
Habitat for Humanity of Greater Los Angeles (Habitat LA) brings people together to build homes, communities and hope. As the top nonprofit homebuilder in the greater Los Angeles area with five consecutive Charity Navigator 4-Star ratings, Habitat LA has partnered with volunteers, donors and Habitat homeowners to build, renovate and repair more than 1,300 homes locally and worldwide since 1990. The lives of thousands of individuals have been transformed as a result of having a decent and affordable place to call home. Habitat homeowners help build their own homes and pay an affordable mortgage. By supporting Habitat LA through volunteerism, donations and supporting affordable housing, everyone can help families achieve the stability and self-reliance they need to build a better future. To learn more, visit www.habitatla.org

City National is a subsidiary of Royal Bank of Canada (RBC), one of North America’s leading diversified financial services companies. RBC serves more than 16 million personal, business, public sector and institutional clients through offices in Canada, the United States and 34 other countries.

For more information about City National, visit the company’s website at cnb.com