We are incredibly grateful for the return of Raul Salinas as Co-Chair of the 2018 Los Angeles Builders Ball for the fourth consecutive year! Raul has been serving on the Habitat for Humanity of Greater Los Angeles (Habitat LA) Board of Directors for several years, bringing his leadership and support to every facet of our mission. As you will learn in this brief interview, Raul is very familiar with the struggles associated with securing a stable home environment, which only fuels his passion to serve the community. See what drives Raul to slay dragons and build homes.

What or Who inspires you (or motivates) you to give back in your community? 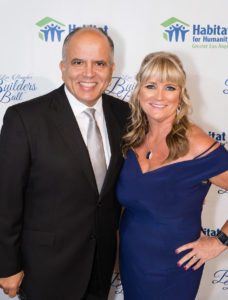 I know what the impact of secured housing can have on a family environment, and, in particular, what it means to a young child – how he or she perceive themselves personally, among his or her friends, and their outlook on the world that awaits them. There is no substitute for the youth of today to have the ability to have a place that they can call home, where they can learn from their parents, bond with their siblings, and succeed academically and socially. This is the philosophy that drives me to be involved with Habitat for Humanity. Habitat meets all of these needs. And, does so like no one else. Check, check, and check.

Why do you support Habitat for Humanity? How long have you been involved?
For all the reasons stated above, I have been supporting Habitat LA for more than three years.

Do you have a superpower?
No real superpowers, just an ordinary Dragon slayer.

What does “home” mean to you?
Home is a place where family is defined and memories are created.

Raul F. Salinas is the Managing Shareholder in the firm’s Los Angeles office. He has extensive business, government and international litigation experience, and handles a wide range of major litigation cases in a number of industries for public and private sector clients. His practice areas include employment, civil public integrity prosecutions, commercial, and cross-border agreements for public and private institutions in both the United States and Mexico. He also regularly advises public entities on issues pertaining to public law affecting personnel, government contracts, conflict of interest matters and other municipal-related matters.

Raul has assisted and participated in trials in state and federal courts and handled numerous contractual/binding arbitrations in domestic and international matters. He has lectured on contractual arbitration agreements and is knowledgeable in all aspects of various alternative dispute resolution mechanisms.

He is admitted to practice in all California state courts and the United States District Courts for the Northern, Central and Southern Districts of California, and in the Ninth Circuit Court of Appeals.